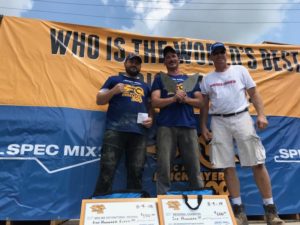 The SPEC MIX BRICKLAYER 500® Ohio regional in Cincinnati brought some familiar faces in 2018. One of those faces belongs to Cole Stamper. The Wheatley, KY native has been a bricklayer for the past two decades, and has been with his company, Mason Structure, for the past 15 years. In 2016 Stamper qualified for the World Championship in Las Vegas, but didn’t place. He admits he went into that competition without much practice, so he decided to put in a little extra time getting prepared this year. It’s safe to say the preparation worked. With an adjusted brick count of 612, Stamper and his mason tender (and brother), Forest Stamper, cruised to victory. Not only did they take first place, but also won the title, SPEC MIX TOP CRAFTSMAN.

Cole first found out about the SPEC MIX BRICKLAYER 500 about a decade ago. It wasn’t until 3 years ago that he decided to give it a shot, and was surprised to find that he was just as quick as everybody else. Of course, being fast isn’t the only skill required to win. You also have to be precise, and a few too many deductions have cost Stamper in the past. This year, his goal is to lay 750 brick in Las Vegas with no deductions.

Masonry wasn’t the first career choice for Stamper. He chose to go to college right out of high school, but eventually had to focus on paying bills. In 1999 he helped out on a jobsite with a friend of his father’s and he’s stuck with it ever since. Stamper encourages anyone considering choosing a skill over college to do the same, but offers this advice, “Just don’t give up too early, it’s hard work, stick with it. It will pay off.”