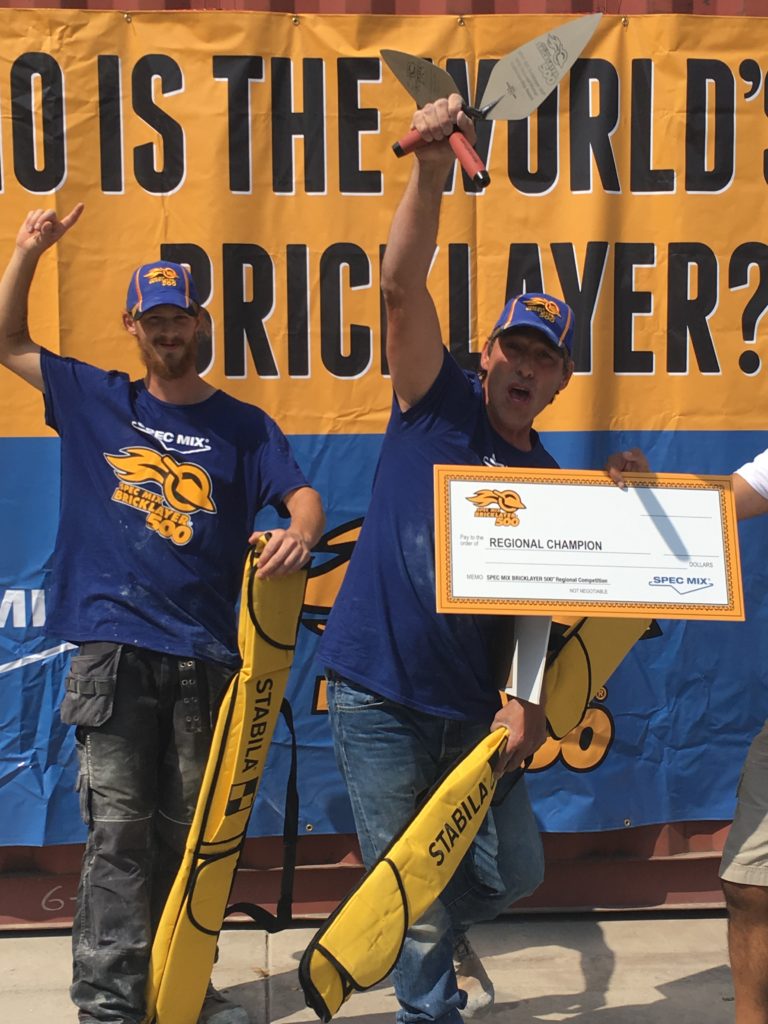 You won’t find many bricklayers with more enthusiasm than the 2018 British Columbia regional winner, John Kerr. The soon-to-be-50-year-old brick mason owns Global Masonry in Surrey, British Columbia, and for him, masonry is a family affair. His two daughters and son all work for Kerr, and his oldest daughter, “Sammy,” 23, might soon be a force to reckon with in the regional competitions.

John has built a wall in eight of the past ten British Columbia regionals. This is his second time qualifying for the nationals in Las Vegas (2014). John learned a ton from his first run at the World Championship, but admits this year has a different feel to it, “I got married two weeks ago, so it was hard to find time to get prepared. But my wife pushed me to get ready, and we got in one practice just before the event.” That practice paid off, but taking that extra step before the regionals was something he hadn’t always taken seriously. Kerr may be a fast bricklayer, but grinding through 522 brick an hour without any deductions requires a game plan. “You can go in blind if you want, but practice helps. It’s the high part that’s tough; laying mud backwards.”

Masonry has been a rewarding path for Kerr. When he was in his late teens and living in Toronto, he paid a visit to the local masonry board. They were putting on a class for masons across the region, and John was the first and youngest person to sign up. His work ethic and positive attitude took over, and he was handed a trowel right away. Kerr has been fortunate enough to work all through the US and Canada, and eventually found himself starting a family and his own business just outside Vancouver, BC.

Kerr can’t imagine taking a different path in life, “When you stand back and look at what you’ve done in a day it’s incredible. It’s not only there today, it’s there 20, 30, 40 years from now. You’re a bricklayer, you’re a different breed in its’ own,” he said. “The best thing that happened to me was to get into this trade. I’ve been doing this 34 years and I still love going to work every day.”

Thankful for this opportunity, John expressed his appreciation for the SPEC MIX BRICKLAYER 500, “Thank all you guys for giving us a chance to show we are the best. I have no doubt I’m good at what I do, and you guys give us that opportunity.”